The Loremaster achievement in WoW WotLK is all about completing quests. You’ll have to do a lot of quests, and I mean A LOT of quests. Good thing is that you’ll have some portions of it done while leveling, but you’ll have to grind the rest.

The Loremaster achievement in WoW WotLK, how to quick guide

In order to get The Loremanster achievement in WoW WotLK you’ll have to finish 4 other, smaller ones, first. They are:

Outlend and Northrend ones require you to finish a certain number of quests in each zone. Kalimdore and Eastern Kingdoms are straightforward, simply completing 700 quests on both of these continents.

As a reward for completing all of that you’ll get a cool looking tabard Loremaster’s Colors and Loremaster Title.

Can I make some gold while doing all these quests?

Sure, mostly Northrend’s ones. Doing 1-60 level quests won’t give you much gold or gear. Maybe some reputation with your faction races, but that’s it. TBC quests will be much better in terms of making gold, but still you’ll get the best results from WotLK zones.

What can The Loremaster WoW WotLK Boost do for me?

Everything, basically. We’ll get a professional booster to grind quests on your character until he reaches the goal – full completion of The Loremaster achievement.
As a reward for completing all of that you’ll get a cool looking tabard Loremaster’s Colors and Loremaster Title. And a bunch of gold and green or blue items from quest rewards, as well as some reputations from all across Azeroth and Outlands.
Gaming should be fun, leave the tedious grind and boring farming to us, enjoy the game, we’ll take care of the rest. 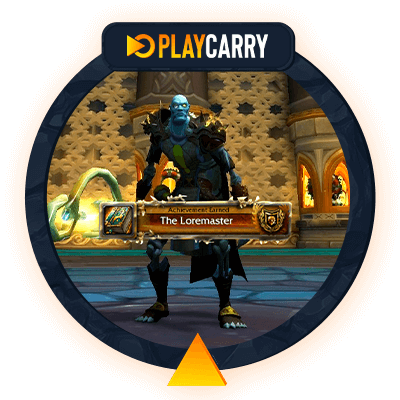