Raszageth Kill is a boosting service for the World of Warcraft Dragonflight’s upcoming Vault of The Incarnates raid. Carry focuses specifically on the last boss kill which has happened to be Raszageth. Kill boost can take its place on Mythic, Heroic, or Normal difficulties.

WoW last bosses are known for being the most challenging encounters in a raid to kill, especially on Mythic and Heroic difficulties . A lot of unforgiving mechanics to be done, healing and dps throughput should be at its best as well as coordination of group and composition.

Raszageth boost allows players to effortlessly get AoTC, CE achievements, and top tier items with an increased ilvl. Save your precious time and patience for something more important, our boosters’ team will gladly carry you and successfully deliver an order.

Purchase Raszageth Kill Boost on EU and US region

Raszageth kill is a carry service that can be performed on all WoW realms of both European and American regions. Customers that purchased boost would have to share some data about the hero craving a carry. Successful boost might require some personal data depending on type of boost(check corresponding section below for more). Information you should know about kill carry:

Rewards vary depending on the difficulty of raids. Mythic Raszageth provides players with the highest ilvl possible obtainable during Vault of The Incarnates patch. One of the rewards datamined is expected to be Renewed Proto-Drake: Embodiment of the Storm-Eater. This drop grants you the appearance of Raszageth herself if you face the challenge of killing her at Mythic difficulty. Power level of loot from Raszageth can’t be discussed yet as a lot of changes and simulations will happen along with progression through the new raid. Generally, WoW last bosses always have a BiS item for at least several classes. Some bosses even have an absurd power level like Gavel from SFO, boosting damage by 15-20% overall.

What is 100% known at the moment is level of items:

This is considering that completing 20+ keystone in time grants 421 as a weekly reward. No matter how hard the player tries, Raszageth on hardest difficulty drops the best gear possible.

Normal difficulty VotI is the main source of gear for many heroes in the first weeks of World of Warcraft Dragonflight release. Raszageth kill will be specifically in hand as the boss provides a high starting item level and as well as some Pre-BiS loot to boost performance for upcoming Heroic and Mythic difficulties.

Groups will suffer a lot the first couple of weeks due to the relatively low quality of items available at the moment, hard mechanics that need to be learned and executed correctly. Lack of knowledge and gear will definitely make Raszageth kill runs feel painful and unrewarding.

Kill Carry comes in hand for these very reasons. Our experienced boosters can skyrocket every single of your characters to desired altitudes. Swift and clean boost is guaranteed.

Heroic version of Raszageth adds several mechanics to the ones players have already experienced in Normal difficulty. The damage and health of Heroic boss itself have also increased substantially to bring even a greater challenge.

Loot has an increased item level capped at 418 for Heroic. At this point some heroic loot gets extremely high value for the majority of players as not everybody has what it takes to reach the last capstone – Mythic completion. Many stop their loot acquisition with Heroic Raszageth Kill, making gear from her extremely valuable for them.

However, with our boosters you can get any loot, as they will pass on every single piece that drops.

Alongside with gear from our carry you will be able to receive FoS achievement “Ahead of the Curve: Raszageth the Storm-Eater” (Heroic difficulty kill boost).

Mythic boss also receives increases in health, damage and number of mechanics. At this point there is no time to think about anything, Mythic mechanics should be executed as fast as possible, or wipe may be on its way. Dps checks are also present in Mythic, so players with poor or even mediocre knowledge of their rotation won’t be able to make it, especially whenever they are stacked in one group.

Mythic Raszageth offers 437 ilvl gear and they’re going to be many classes’ BiS . An absolutely stunning dragon riding mount is also expected as a drop.
Purchase Mythic kill boost and get not only above mentioned stuff, but also title and FoS achievements “Cutting Edge: Raszageth the Storm-Eater.”

Depending on circumstances carry may take various amounts of time, however, generally it is expected to be around 1 hour.

Is it possible to get several Raszageth Kill Carries in a row?

If you have made a kill on your character on week 1, you won’t be able to receive any gear this week even if you kill the last boss again, you would have to wait for the upcoming one. Although, you can order carry on all available difficulties being: Mythic, Heroic, Normal; As they don’t share lockout.
Carries on several characters simultaneously can also take their place – all of them have separate IDs.

All mounts from Mythic are usually guaranteed drops and are in quantity of 2 per single elimination of boss. This is the exact quantity of clients boosters can have during 1 go .
Note that it is not applied to heroic boosts due to the nature of being able to have 40 people in a raid and only gear drops at all. 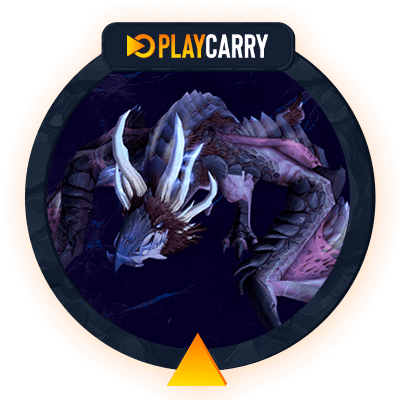